Skiing in Norway is to die for. The adventurous ski tourer may skin from beach to summit and rake in generous rewards: up to 2,000 m of freeskiing straight down to the blue sea, northern light skiing, or spring slush under the midnight sun. Norwegian costal skiing dramatically differs from its counterpart in the European Alps. Not to mention snowpack stability. That’s to die from.

For my Norwegian readers

Ask any Norwegian and she will confirm it. All Norwegians have at least one pair of skis, usually several pairs (the author has five pairs). The nation is nothing less than obsessed by skiing. As a consequence, visiting skiers will always be massively outnumbered by local powder dogs.

LYNGEN CIRCUS: Storhaugen is the Piccadilly Circus of Lyngen. Don’t expect to be alone. Photo: Esben A. Nilssen

Surprisingly, the overweight of locals is not reflected in avalanche fatality statistics. During the last eight seasons 33 backcountry skiers and snowboarders have succumbed to avalanche (varsom.no). Of these, 13 skiers (40%) were foreign, usually on a guided tour. Compared to European Alps, where an average of 100 persons die every year (Techel 2016), the numbers could certainly be perceived as modest. However, I expect that more than ski hipsters and wealthy Swiss will discover Scandi skiing going forward. Besides, European snow is already a scarce commodity, soon an oxymoron, and skiers will turn to Arctic skiing. Chances are that we will see an increase in tourists being sent home in sealed caskets. Boots on, skis buried snow deep. Trouble is plenty - 438 avalanches were reported only this season. Why do visiting skiers draw the short straw? I believe there are three main reasons: Atypical costal climate, guides, and the human factor.

CLEAVAGE: North-Norwegian mountains are not shy. Photo: Esben A. Nilssen

Avalanche experts differentiate between three snow climates: inland, costal, and transitional climate. Inland snow climates typically have unstable snowpack for prolonged periods, while snowpack in costal climates stabilise faster due to temperatures close to the freezing point. I’ll spell it out, stabilised snow is less prone to slide and turn into an avalanche. For visitors it is reasonable to believe that ski touring Meccas like Lofoten and Lyngen have a costal snow climate. Not so. Clever scientists studied 60 winters in the costal climate of Troms county (the county of Lyngen) and found that 39 out of them had the characteristics of inland snowpack. Only 13 had a typical costal snowpack! As a consequence, they had to invent the term «Arctic transitional climate». Memorise: snowpack in Arctic coastal areas are more often than not unstable for prolonged periods. Do guides know?

BRING YOUR OWN BOAT: You may ski from sea to summit along the coast of Norway. Photo: Esben A. Nilssen

Many foreign parties bring their own certified guides. The local guides of course frown upon this practise and argue that they lack local knowledge. Although they may have a point, there is no reason to doubt the competencies of overseas guides. They definitely know how to dig and study the snowpack, understand terrain, as well as read avalanche and weather forecasts. Personally, I do not use any guides unless they have a well-documented track record or I know them personally. It boils down to understanding the guide’s perception of risk. What rewards, if any, outplay safety? Guides are hired to play it safe, to find the best snow, but also to sniff up hazardous runs. Does he understand my needs, does he fully inform me, or is he just focusing on putting up a stunning show? The Sorbmegaisa avalanche in 2012 (Lyngen) is an example of a spectacular run turned into deep tragedy. A French guide took five experienced Swiss skiers down the steep sides of Sorbmegaisa and triggered a massive avalanche killing all but one. The rest of the party sat ringside watching the tragedy play out. Why did this happen? Enter «human factor».

AUTHOR & FRIENDS: Is it costal, inland or transitional? Photo: Esben A. Nilssen

A skier’s perception of risk is distorted under certain conditions or in certain groups. The members of the group may know everything that is worth knowing, but still take the wrong decisions. This is called «the human factor». Parties and guides traveling to the Arctic are under a lot of pressure. The trip probably cost an arm and a leg, weather is unstable, time is scarce, dreams are to be fulfilled. Back home, friends have turned on Instagram push notifications. Such groups are naturally highly committed to their goals. It takes courage to be the person, to cite human factor expert Ian McCammon, «[..] with the wisdom to stop the group’s momentum at the right times and reconsider evidence and the opinions of the group.» One would think that this person would be the guide, the guy with the expert halo. Unfortunately, his business idea is to fulfill dreams. Are local guides better at dealing with the human factor? Doubt it. Still, local skiers are less victim to this psychology, they can always ski another day and are therefore less prone to end up in avalanche statistics.

Esben A. Nilssen converted both from FM to DAB and from telemark to ski touring last year. He will never look back. Esben is a philosopher with a PhD in molecular genetics working with biotechnology in Oslo, Norway. The northern counties are however Esben’s birthplace and playground. The man has been in a midlife crisis since turning 21 and now dreams about giving it all up to ski and write the book «Being and Skiing». This season he has promoted Avalanche awareness amongst backcountry skiers by writing for the “Avalanche – no thx” campaign. 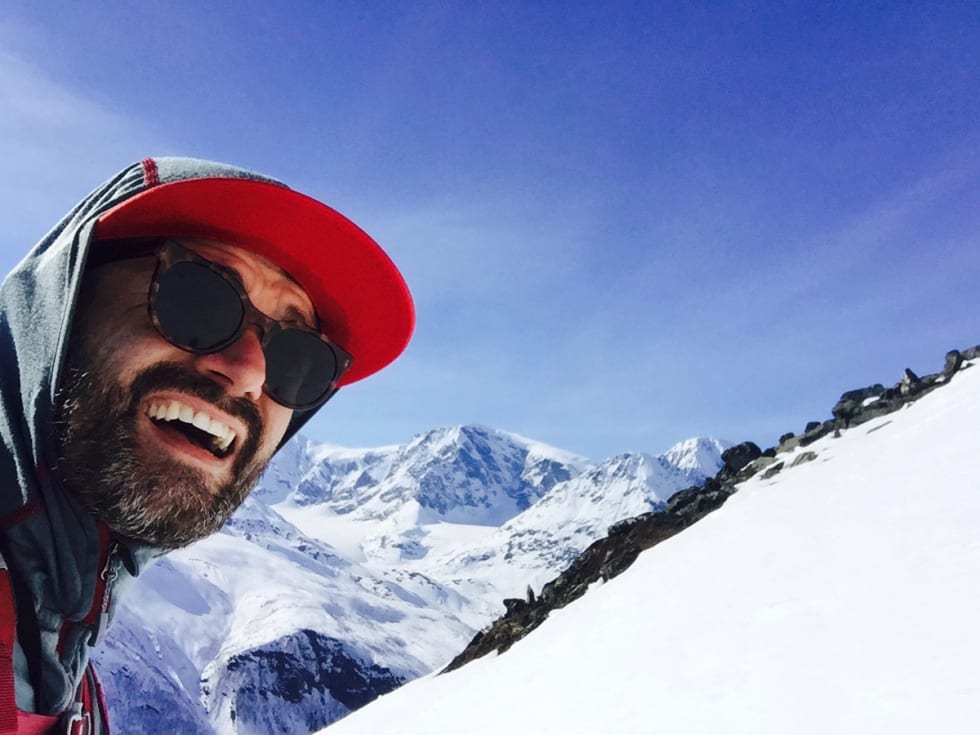 My advice is to educate yourself. Learn how to identify avalanche terrain, understand snowpack, check out weather and avalanche forcasts (yr.no, varsom.no), read one of the many guidebooks, buy a map, talk with locals. Call your own shots. Be that wise person. I guarantee a better experience and a nice travel back home. If you insist on a guide, it is probably not bad to choose a local one, preferably a female. Ask her what’s in the name Sorbmegaisa and she will answer it is sami. It means «the place where you shall perish».

THE SIRENS: The ferry to Lyngen opens its mouth and the mountains start luring you into trouble. Photo: Esben A. Nilssen